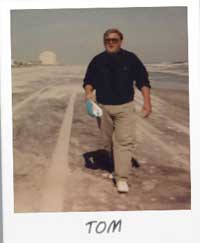 Tom was diagnosed with Parkinson’s disease at age 47. After 6 years of fighting Parkinson’s, Tom decided to go for Deep Brain Stimulation. With a much too speedy release from the hospital and one complication after another, at age 54, Tom lost his battle with the monster that invaded his body.

Our family decided to turn this tragedy into something positive. We want to help others so they can escape this horror. It also gives more purpose to someone so young who went through so much.

When Michael J. Fox announced that he had Parkinson’s disease, he looked like Tom. The same symptoms were present including the expressionless face, the dyskinesia, and his story of denial. His foundation was exactly what we were praying for – Finding the cure in our lifetime. We trust the Michael J. Fox Foundation because it is a lean organization. Our money goes directly to science.

We will give more information on our 19th annual event when we are permitted to gather again and support this important cause.